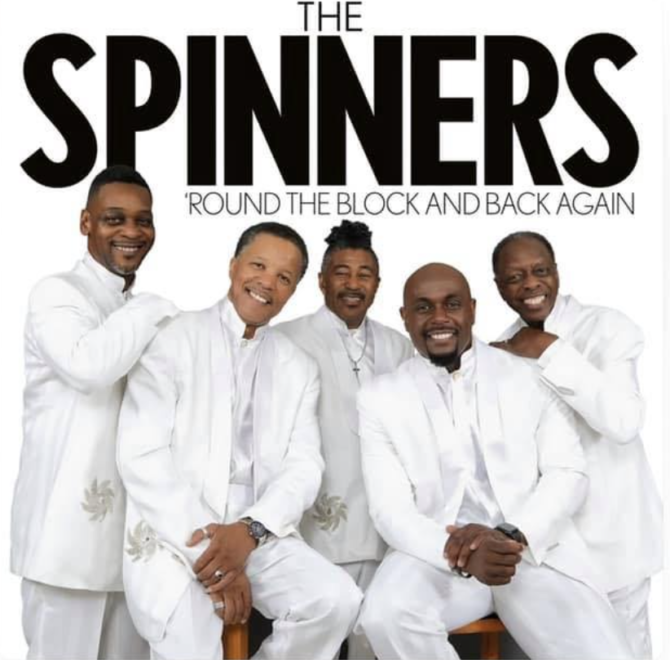 “Could It Be I’m Falling IOn Love”

Timeless in a way that few other acts today are, The Spinners are one of the most iconic and enduring groups in R&B history. With a towering legacy spanning over six decades, The Spinners have never lost their universal appeal… And this Summer, they return with their first all-new original album in nearly 40 years– the aptly-titled, Round the Block and Back Again.

The band both created and came to define the singularly smooth sound of Philadelphia Soul, channeling the highs and lows of romance and heartbreak into a catalogue of classic hits, beloved across generations. Throughout the years the Spinners have topped both the Pop and R&B charts with smash singles like, “I’ll Be Around,” “Could It Be I’m Falling In Love,” “Then Came You,” “The Rubberband Man” and many more– earning six Grammy nominations, a star on the Hollywood Walk of Fame, and selling millions of records worldwide in the process.

Though The Spinners popularized, and came to embody, the lush sound of Philly Soul in the 1970s, they got their start in Detroit at Motown, in 1954. After a brief time there, The Spinners signed with Atlantic Records in 1972, teaming up with producer Thom Bell in Philadelphia, where the band blossomed under his masterful watch.

In 1979, The Spinners completed their first collaboration with producer Michael Zager, and by early 1980, the single, “Working My Way Back to You,” was topping Pop and R&B charts giving the group its 12th gold record. The Love Trippin’ album’s release included “The Cupid Medley,” one of the fastest-selling records in The Spinners’ career. The follow-up album, Labor of Love, featured such stand-out tunes as “Yesterday Once More,” and “Long Live Soul Music.”

Four decades later, The Spinners haven’t skipped a single beat– as Round the Block and Back Again makes wonderfully clear. Melding intricate harmonies with breathtaking vocal acrobatics, the upcoming album, slated for release August 27, shows The Spinners at their soulful, multi-octave best.

Timely yet timeless, Round the Block and Back Again is a triumphant return. From the classic jazz of “Show Me Your Heart” to the very relevant ode to love in the age of COVID, “Missing Your Embrace”…The 2021 Spinners navigate the sands of time as seamlessly–and smoothly–as ever. Preston Glass, the album’s producer, studied at the feet of Thom Bell– and it shows…He knows precisely how to make what’s vintage feel contemporary, and vice versa.

Says Glass of working on the record, “I wanted to emphasize to the listener that these guys are ‘the real deal’ – (still today, with a virtually new line-up)… And the phrase, ‘Round The Block And Back Again’ came to my mind when describing this project and these gentlemen….It was so inspiring for me to produce and write songs for this new album….and I was so honored that original member, Henry Fambrough, still leading the group through its vocal paces, gave the stamp of approval to do so.”

A fan favorite drawing large crowds to sold out performances both at home and abroad, The Spinners have left an indelible impact, not only on music history– but on the hearts of millions of fans throughout the world. Today, Fambrough is joined onstage by Jessie Peck, Marvin Taylor, Ronnie Moss, and CJ Jefferson; a soul-infused 4-piece band, led by Keith Ferguson, backs them up. The group is currently on tour throughout the continental U.S. as well as Hawaii throughout the Summer and Fall.